Five years ago, I wedged myself into a town car with two fistfuls of luggage and settled into my seat next to my parents. My palms were drenched with sweat, I was unusually clad in comfortable velveteen sleep pants, and I was headed into the middle of New York City rush hour traffic to get to the airport. To take a flight. At night. Overnight.

For days leading up to this trip to Israel, I was overcome with the full battery of human emotions. I cried at the mere suggestion of selecting summer clothes for the trip and avoided all interaction with my closet. I giggled uncontrollably as I thought about spending New Year’s Eve in Tel Aviv at a swanky hotel feet from the sand. I yelled angrily at and about minutiae – the bill that was accidentally chewed by a postal machine, the chicken cutlets that wouldn’t cook quickly enough. I sank my teeth into pillows, uncooperative books tumbling from their shelved perch, and the tender flesh between my thumb and pointer fingers. I didn’t know it at the time – clearly – but I was a woman with SPD and I was terrified about going away.

It is very scary for people with SPD to go off on holiday vacations.Why? Because whether or not we want to admit it, our lives often look like this, day-in and day-out:

Accompanying anxiety sadly not represented above

T.S. Eliot once wrote “[I] have known the evenings, mornings, afternoons. I have measured out my life with coffee spoons.” I always liked to think that as a person with SPD, especially one with sensory avoiding behaviors, I am perpetually measuring out my life with coffee spoons. I know exactly how much time each activity in my day should take. I anticipate my schedule – which, I should mention, is often repetitive and familiar – so that I can better envision and plan for the sensory experiences to come. Just over an hour in a cafeteria? (Thanks for the idea, floating hand above.) No problem! That only means 75 minutes to contend with the barrage of sensory information – the crack and squeak of footwear across the waxed floor, the fluorescent lights bouncing off of the bleach-white surfaces, the murmurs and shouts of nearby diners, the crash of metal fork against knife – as well as make a valiant attempt at focusing in on what my lunchtime companions are saying to me.

Difficult, draining, but there is an end-point, a time on the clock when I can say – hey guys, I’ve got to run and get the hell out of Dodge.

For the record, this is what I call rigidity: 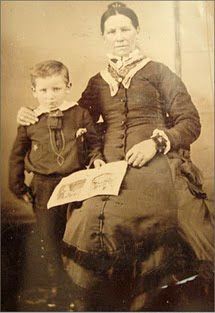 Wyatt Earp and his mother in 1856 doing their best statue impressions
(I lucked out with that “Dodge” reference, btw)

Sure, yes. I am ultimately less Matthew McConaughey on sedatives in a hammock in Aruba on vacation and more mid-1800s woman in a corset clutching her child and sternly glaring at the new-fangled camera. But really, I am Rachel on the edge of sanity with the light of a thousand fluorescent suns in my eyes and the echoes of a thousand speakers in my ears.

I don’t usually know where my body ends and the world begins. Can you blame me for wanting something grounding, something to act as scaffolding when the unpredictable world can fall down in chunks at any moment? 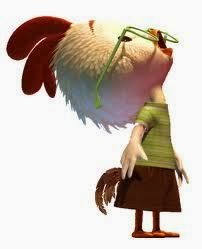 Let’s recap, shall we?

SPDers, especially those who avoid sensory stimuli, often keep tight schedules. We plan ahead so that we can better anticipate the ways in which we may need to deal with sensory input. We also plan so that we can figure out when we can take a breather. Because in case it hasn’t become clear just yet, having SPD is exhausting. We’re not just dealing with the events of our life, we’re dealing with a somewhat busted processing system that is perpetually demanding our attention. A schedule gives us permission to take a pause. Look how much I’ve been able to do! I’ll often think to myself. I need to lay down now or I fear that my face may actually melt off! Damn everyone and everything in my way!


Which brings me back to holiday vacations.

Suddenly, our familiar, somewhat-stable sensory world is turned upside-down. We’re encountering new places, new people, new sensory input. Some of it is amazing (halva, the sugary ground sesame confection found throughout the Middle East, tastes the best when bought from a street vendor in the thick of Jerusalem’s Old City) – and some of it is terrifying (never get accosted by a French Canadian marionette in a souvenir shop when your senses are going haywire, mon ami, trust me on this one). And not only are we elsewhere, frantically working to rebuild some semblance of a familiar schedule, we’re most likely faced with people who don’t know about our SPD, minimally understand our SPD, and/or have never seen us use our quirky, Seussian looking tools.

Our self-esteem once again goes into a tailspin – what if Aunt Joan asks me about my fidget?! What if cousin Danny makes fun of my Wilbarger brush? What if Grandma Maris won’t let me leave the table for some quiet space? 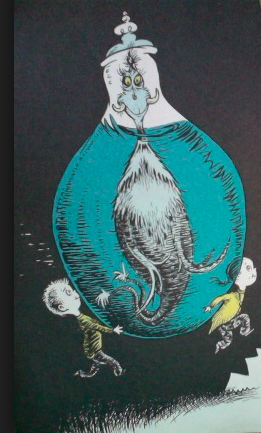 They’ll bring their farfookas and bang their whohoopers . . .
At least most SPD tools look less creepy than this guy –
Although maybe he’s onto something here

[Image description: The picture shows a drawn Dr.Seuss character in a jar almost full of water with two children carrying the jar.]
So what’s an SPDer to do? Never venture out in an effort to protect the schedule, the anticipation, the tools, and the self? Spend Christmas alone, Chanukah solo, and New Year’s Eve in hiding?
That’s a negative, ace.
Listen. We with SPD have SPD. We are going to have it today as we gently twist in our office chair. We’re going to have it next week as we cringe at the merriment and mayhem in Times Square. We’re going to have it the month after that wherever we may find ourselves. Wherever we go, there we are. We can fight this, resent our lot in life, and hate ourselves – but in battle of You vs. Yourself, you will always lose. (These odds are never in your favor.) We can also make the conscious choice to make room for our SPD at the proverbial holiday table. Move over, Great Aunt Mildred. Watch out, carved turkey. I’m a’comin’!
We can recognize that holidays mean disrupted schedules, and disrupted schedules are scary.
No, it’s not the same! Yes, that means it’s different! It’s OK to be edgy and angry and anxious. Anticipating this temporary change is most certainly part of our MO. Go ahead, kick the ottoman. Cry in a heap on the bedroom floor. Yell at your neighbor. This pent-up anxiety will ultimately be your fuel as you burst with energy from the stressful wait-here present and propel yourself into the holiday weekend.

More Radical Reads: Holiday Stress: Five Ways to Manage the Chaos that Comes with the Holidays

We can work to find structure and stay regulated in other places.
Maybe you can always sleep until 10am when you’re home for Christmas. Maybe New Year’s Eve in Prague means the festivities begin at 11pm and go until dawn. Maybe there’s always a family siesta sometime after lunch and a guest room with your name on it (and, ahem, weighted blanket in it). Brush your teeth at 7am, use your Wilbarger brush at 7:10. Find a schedule that works for you within these new (and temporary!) boundaries. Fill up that sensory bank in spite of what people may say (or even what you suspect they may be thinking – if they don’t like it, that’s just too bad).
We can remember that this is a temporary change.
These special days of the year are small blips on the radar of our lives:
Boop.  Boop. Boop. Happy New Year!
Have you survived them before? Well, you’re reading this, aren’t you? So I’m going to guess yes. You can survive them again. You can detach from your schedule and face them head-on. Will you feel uncomfortable? Probably. Will you feel anxious? Sure. Will you have a good time? That’s your call, but I sure hope so. The radar of our lives is finite, and somewhere out there should be something that we find to be pleasurable and peaceful all at once.
More Radical Reads: Depressed During the Holidays
It’s been five years since I bravely boarded a sunset plane to another continent in an effort to celebrate the holidays somewhere special. I was a wreck. Was it worth the anxiety and the angst, the edginess and the effort? Consider this: I rang in a new decade thousands and thousands of miles away from home during the holiday of Sylvester, a day that for me evoked a cartoon Puddy Tat with a sprawling grimace. I palmed ancient ruins and felt the energy of the ages move through my fingertips. I floated in a vast salt sea very far away from the safety of my supremely structured schedule.
Why yes. Yes it was.
Floating in the Dead Sea, New Year’s 2009

[Headline image: Fair skin person with medium grey hair wears a red skull cap while standing outside looking toward the sky and buildings as they drink from a Starbucks holiday cup. Pexels.com ]

Rachel S. Schneider, M.A, MHC is the author of Making Sense: A Guide to Sensory Issues, slated for publication by Sensory World in February 2016, and now available for pre-order on Amazon  and Barnes & Noble.  A trained Mental Health Counselor and proud Sensory Processing Disorder (SPD) adult, Rachel was diagnosed with SPD in 2010 at age 27 and since then has advocated for adults with her neurological condition through her writing and related outreach projects. Rachel authors the blog Coming to My Senses and maintains a website on adulthood SPD.  She frequently blogs for the Sensory Processing Disorder Foundation and writes for Sensory Focus Magazine, and has most recently been featured on The Body is Not An Apology, Mind Body Green, and the third episode of the SPD Parent Zone Podcast. She tweets about SPD at @coming2mysenses and posts about SPD on Facebook. Rachel lives in New York City with her husband, and she firmly believes that her body is not an apology. It is a triumphant shout.

This article first appeared on the author’s blog, Coming to My Senses, and is reprinted with permission.